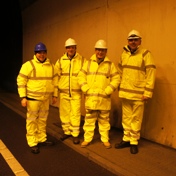 Henry Williams Limited will carry out inspection and maintenance of the A505 Weston Hills Tunnel, at Baldock, in Hertfordshire, for the next five years in a deal worth an estimated £1million over the full term.

It is the third tunnel contract for the Darlington company, which is already responsible for the Saltash Tunnel, on the Devon-Cornwall border, and the Medway Tunnel, in Kent.

Weston Hills, a 230-metre twin road tunnel, was opened in 2006 as part of a £43m bypass to reduce congestion in Baldock.

Alan Herron, production manager for Henry Williams, said: “Highway tunnels are by nature a challenging environment and it is important to keep them in the best possible working condition to prevent system failures due to traffic pollution.”

Stuart Pile, Hertfordshire County Council’s Cabinet Member for Highways and Transport, said: “The A505 is a busy, major road and it is essential that the Weston Hills Tunnel is maintained to the highest possible standards. We are confident that Henry Williams’ experience in this area makes them the right choice for the work.”

Henry Williams has been associated with inspection and maintenance of the Saltash Tunnel and adjacent Tamar Bridge, near Plymouth, continuously since the road system was opened in 1988, and also forms part of the 24-hour emergency support team. The bridge and tunnel – the only two-way, tidal flow, three-lane tunnel in Europe – form part of the crucial A38 link to the South-West, a route used by up to 50,000 motorists a day in the summer.

The engineering company, which is a major supplier of products for Britain’s highways network, was responsible for the design and installation of the electrical control system which maximizes traffic flow across the bridge and through the 410 metre-long Saltash Tunnel.

At the Medway Tunnel, on the A289 linking Strood with Chatham in Kent, Henry Williams provides regular maintenance, as well as call-out support, for a range of electrical equipment, including distribution panels, lighting and ventilation. The company is also involved in maintenance projects on the Thanet Way Tunnel, on the A299 in Kent.

Henry Williams, whose highways products include high-integrity roadside cabinets and post assemblies to display variable message signs, also holds the sole UK and Ireland licence to distribute and manufacture ZIPpole, an advanced energy-absorbing lamp-post that is widely used in Scandinavia and parts of Europe.

The story of Henry Williams Limited goes back to 1883, when the company was formed to manufacture control and signalling equipment for the rapidly expanding railways network. Since those historic and pioneering days, our skills have broadened, our technology has advanced with the time and our sphere of influence has widened considerably....read more

This website uses cookies
We use cookies to personalise content, to provide social media features and to analyse our traffic. We also share information about your use of our site with our social media and analytics partners who may combine it with other information that you’ve provided to them or that they’ve collected from your use of their services.
If you want to know more about the cookies in use on this website before choosing please read our Privacy Policy.